OSTEOLOGY OF THE VERTEBRAE

Structure of a typical Vertebra
Vertebrae have a common basic shape that changes in the different
segments of the spinal column to adapt to their various static needs.
Every vertebra with the exception of the first cervical (atlas, C1) vertebra has:        Parts:


Processes:
There are seven(7) processes extending from the vertebral arch,four(4) of which are articular processes,processus articularis, two(2) transverse,processus transversus and one(1) spinous,processus spinosus.
The body and transverse processes of the thoracic vertebrae bear joint facets for the ribs. Every vertebral arch at its origin from the vertebral body is marked above and below by a notch (incisura vertebralis, inferior and superior vertebral notch). The notches of two adjoining vertebrae form the intervertebral foramen,which transmits the spinal nerves.


There are 7 cervical, 12 thoracic, 5 lumbar, 5 sacral and 4-5 coccygeal vertebrae. Each of these vertebral groups corresponds to a region of the vertebral column.Vertebral column contains 33-34 vertebrae in total.
CERVICAL VERTEBRAE 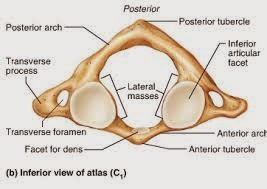 The axis (C2) is the second cervical vertebra. On the superior surface of its body, the axis bears a thick vertical process, the dens.The dens carries the anterior and posterior articular surfaces,and its apex.The dens corresponds to the body of the axis during during the developmental process.


clinical application:Muscle, bone, or ligament injury in this portion of the spinal column is relatively common in individuals involved in automobile accidents and sports injuries. Joint dislocation occurs commonly between the fourth and fifth or fifth and sixth cervical vertebrae, where neck movement is greatest. Bilateral dislocations are particularly dangerous because of the probability of spinal cord injury. Compression fractures of the first three cervical vertebrae are common and follow abrupt forced flexion of the neck. Fractures of this type may be extremely painful because of pinched spinal nerves.

Twelve thoracic vertebrae articulate with the ribs to form the 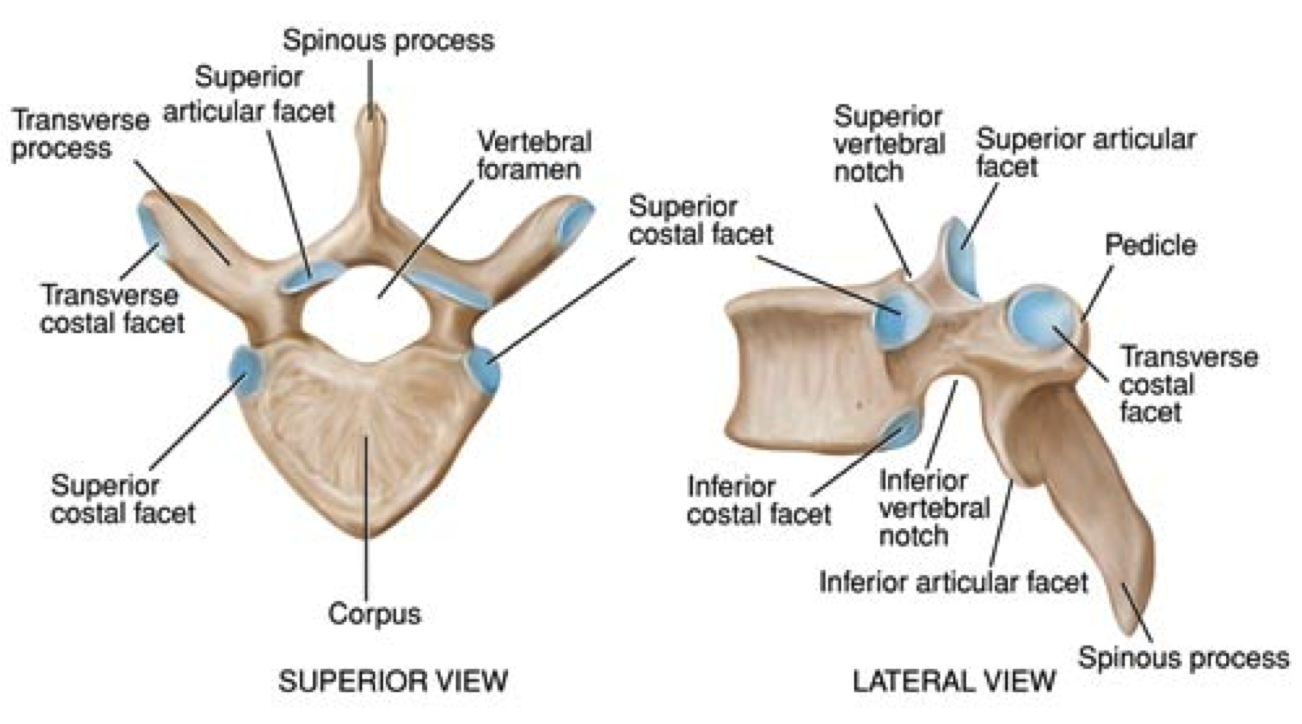 THE LUMBAR VERTEBRAE
The five lumbar vertebrae, vertebrae lumbales(L1-L5), form the lumbar region of the vertebral column. They are characterized by the following structural features: 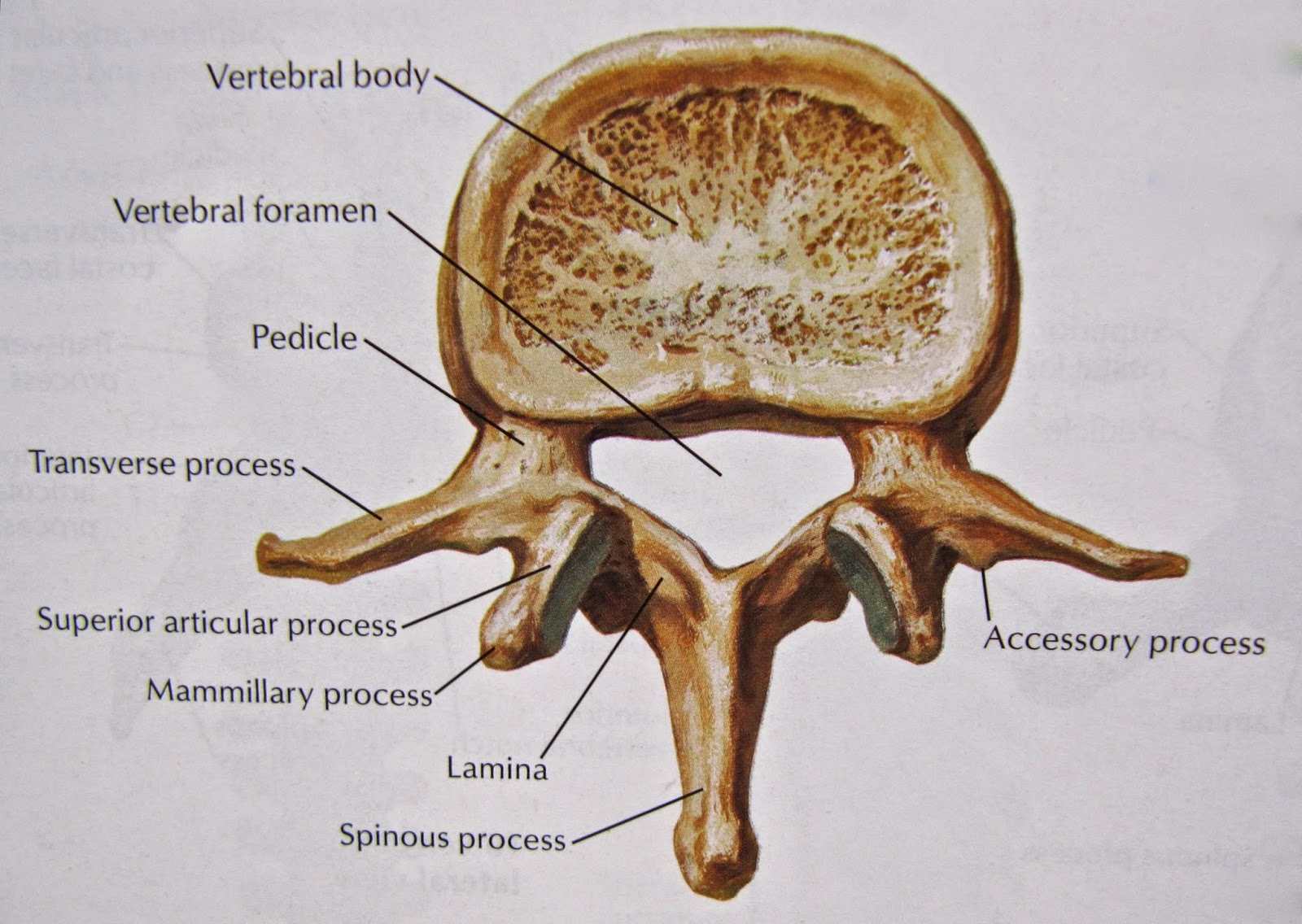 A laminectomy is the surgical removal of the spinous processes and their supporting vertebral laminae in a particular region of the vertebral column. A laminectomy may be performed to relieve pressure on the spinal cord or nerve root caused by a blood clot, a tumor, or a herniated (ruptured) disc. It may also be performed
on a cadaver to expose the spinal cord and its surrounding meninges.


The wedge-shaped sacrum provides a strong foundation for the pelvic girdle. It consists of four or five sacral vertebrae that become fused after age 26. The sacrum has an extensive auricular

surface on each lateral side for the formation of a slightly
movable sacroiliac (sak''ro-il'e-ak) joint with the ilium of the
hip. A median sacral crest is formed along the dorsal surface
by the fusion of the spinous processes. Posterior sacral foramina
on either side of the crest allow for the passage of nerves from
the spinal cord. The sacral canal is the tubular cavity within the
sacrum that is continuous with the vertebral canal. Paired superior

articular processes, which articulate with the fifth lumbar
vertebra, arise from the roughened sacral tuberosity along the
posterior surface.


The smooth pelvic surface of the sacrum forms the posterior surface of the pelvic cavity. It has four transverse lines denoting
the fusion of the vertebral bodies. At the ends of these

lines are the paired pelvic foramina (anterior sacral foramina).
The superior border of the anterior surface of the sacrum, called

the sacral promontory, is an important obstetric
landmark for pelvic measurements.